The essential reason the female body to be considered as attractive and beautiful is its curves and the harmonious succession of curled areas.

The two protruding regions in the female body are the breasts and the butt. With this feature, both contribute to aesthetic perception and affect posture. In the past, cosmetic surgery was focused in the breast area, butt had been ignored. However, especially in the last 10 years, butt aesthetic applications have increased rapidly.

A lot of women are uncomfortable with their butt shape. For some, the problem is that the butt area is skinny, lower or small while others complain about its size, width or weight gain of the butt area. Women now want to have a more upright, fresh, fleshy, rounded, cellulite-free and young-looking butt.

How is a beautiful butt defined?

The voluminosity of the butt region depends on the structure of the gluteus maximus muscle located on the bone roof and on the fat stores on it. The butt should be upright, round and taut with the lines “bulb-bottle” shaped and soft-transitive from waist zone to the butt. While the waist is thin, the width towards the butt should increase. The ideal waist / butt width ratio is 0.70. This ratio deteriorates with aging, increase in skin laxity and weight changes and approaches to 1 so the butt takes the form of “square”.

It is also expected for butt skin to be taut and cellulite free.

In 2004, Cuenca-Guerra listed the characteristics of an attractive butt. Accordingly: 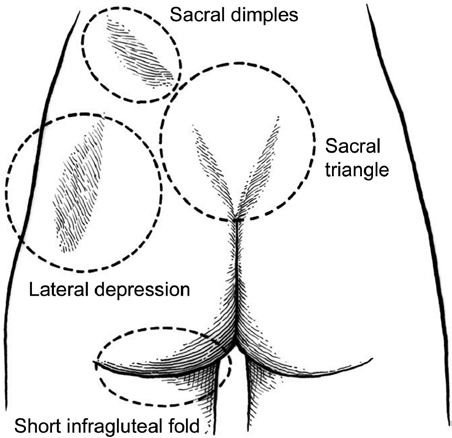 The last article above has lost its validity in recent years, contrarily to have more rounded butt has been prompted instead of slightly dented.

While the American and European white race once wanted a more athletic, relatively smaller and upright butt, trend in perception of hispanic aesthetic caused the butts to be larger, more rounded and protruding (Brazilian butt).

Mendieta classified the butt area into 8 aesthetic units and mentioned one by one. It's not enough to handle the butt only for ideal look but the waist, waist-butt transition, legs and even abdominal region should also be assessed separately and then as a whole. In order to achieve the ideal ratio (0.70), the necessary interventions should be performed for each.

The usual applicants of butt surgery

It is possible to use different techniques and methods depending on the discomfort in butt aesthetics. In general, butt aesthetics, according to the desired result, can be examined under three main headings:

These prostheses placed under the muscle cannot be felt while sitting or lying down.

It is usually a 1.5 hour operation.

It is performed under general anesthesia.

It is possible to be discharged within the same day and to return to work after 3 to 4 days following the operation.

In this operation, the scar is hidden in the butt fold.

The excess fat in the abdomen, waist and buttocks is taken by liposuction, then concentrated through special procedures and replaced again on the upper part of the butt. With this method, the butt is plumped and a lifted appearance is achieved.

This method can be applied if you have a less or moderate enlargement demand than a silicone prosthesis. Of course, the skin quality and the structure of cellulite affect the choice of this method. Some amount of fat injected into the butt through the butt augmentation procedure with fat injection will melt, but about 60 percent of the fat remains in the butt in a one-year period.

During butt enlargement with fat injection, it is possible to intervene in every part of the butt. It also allows shaping of the waist area because liposuction is performed at the same time. Fat injection can also be used as a supportive procedure for better results in people who have butt augmentation with silicone prosthetics.

Since it is an operation with very small millimetric incisions, there will be no noticeable scarring.

Butt aesthetic with fat injection is usually an operation lasting 1.5 hours under local or general anesthesia.

You can be discharged on the same day after the operation and 4-5 days is needed to return to your work. A recovery corset should be worn for the first two weeks after the procedure.

People who lose weight through surgery (gastric by-pass, sleeve etc.) or diet and sports have severe sagging in the butt region. The approach to our patients in this group is different and specific.

For people with this complaint, it is often possible to stretch and lift the abdomen and butt area in one session. During this procedure, tissue that should be removed from the butt area can be recycled. It is possible to get a lifelong prosthetic appearance which obtained from one's own tissue by filling this tissue into the butt which is shaped and lifted like a prosthesis. Thus, patients in the post-obesity group may have a plump and steeper butt.

Questions from you about butt aesthetics

Can men get butt aesthetics?

Yes, today, men are also interested in butt aesthetics. In fact, in many studies, the butt is one of the most attractive parts in the male body according to women. They say that upright and tight male butt looks attractive. Many men may also feel uncomfortable with their appearance because of their low and skinny butt.

Should I prefer fat transfer or silicone implant?

This decision depends on your body structure. If you are too weak, silicone prosthesis solution has to be chosen since it will not be possible to absorb enough fat to shape your butt.

If you have a sufficient amount of fat, then forming with fat transfer will also be a preferable solution, but keep in mind that some of the fat transferred will melt anyway.

Two methods can be combined in persons with appropriate body structure.

Is the butt formed by fat injection permanent?

Some of the fat injected will melt in time. A combination with PRP or stem cells can be applied to make it persistent but these processes will raise the cost. Another solution is to inject more than necessary at the beginning since we know that some of the fat will melt. In addition, it is possible to freeze and store the excess fat in order to inject them another time under local anesthesia.